What does it mean when Police use Excessive Force? 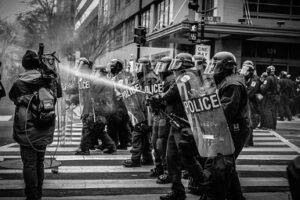 During an arrest, depending on the circumstances, a police officer may use force to subdue a suspect. However, any force used must be a reasonable amount of force, examining the totality of the circumstances. When an officer uses more force than necessary, going beyond what is needed to subdue a suspect, that force may become unreasonable and excessive. Once an officer starts to use unreasonable and excessive force, those who are injured have rights to hold the officer(s) accountable. This right is found in the Fourth Amendment to the United States Constitution, which prohibits unreasonable searches and seizures, the Eighth Amendment to the United States Constitution, which prohibits cruel and unusual punishment and other laws.

Force is a part of policing, as many may have seen on television. Television shows depicting police officers and their interactions with those suspected of a crime typically show police officers using force. For example, these television shows depict and officers using force when a subject is resisting arrest or failing to comply with an officer’s orders, or running from law enforcement.

But what if the subject is not resisting arrest or trying to flee?

If a non-threatening suspect is complying with an officer’s orders, the officer generally may not use force that includes:

It is possible that a law enforcement officer’s positioning while restraining the suspect can be considered excessive. For example, the officer has his or her knee on someone’s neck causing a lack of oxygen, or locking the suspect in a chokehold when the suspect is already cuffed. In fact, in recent months, many states have enacted laws banning chokeholds. This has also come to light and received national attention with the George Floyd killing.

What if an officer encounters a resisting subject?

Using verbal commands should be the first step an officer takes when interacting with a resistant subject. Though verbal commands are not always effective, it is important to start with them rather than resorting to physical force or even deadly force immediately.

If a police officer does need to use physical force, on a resisting subject, they must do so without causing injury to a suspect unnecessarily. Once a suspect is already restrained, police officers should stop using physical force. Physical force that results in unnecessary injuries is an example of excessive force. However, as seen on television shows, and all too common in real life, there are many times where a non-resisting, complaint suspect is further injured or injured by the police even though already restrained. The officer would be violating the complainants’ Constitutional rights and should be held responsible.

Police officers have a duty to use the least amount of force that is necessary based on the actual threat or the threat that they reasonably believe exists. This judgment is based on whether the officer’s actions were objectively reasonable, given all of the unique circumstances of the incident.

Be sure to stay tuned to the Coffman Law blog, as we will continue updating our readers on the latest and most important news in the areas of civil rights, police misconduct, personal injury cases, and more.