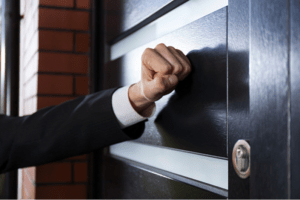 Breonna Taylor was killed when police in Louisville were executing a no-knock raid at her apartment. A no-knock raid, or a no-knock warrant, is a search warrant that allows police officers to enter certain premises without first knocking and announcing their presence. In the case of Breonna Taylor in Kentucky, the police got a warrant, broke down the door to surprise the occupants inside the premises.  By conducting this raid unannounced, one of the occupants inside starting firing at the officers because they believed it was a home invasion. Breonna Taylor died when police returned fire.

Chokeholds and other restraints meant to restrict blood flow to the brain drew widespread criticism after the death of George Floyd, who died after former Minneapolis Police officer Derek Chauvin kneeled on his neck for more than nine minutes. According to the Washington Post, at least 32 of the nation’s 65 largest police departments have banned or strengthened restrictions on the use of neck restraints since the death of George Floyd. However, an NPR review of bans on neck restraints in some of the nation’s largest police departments found them largely ineffective and subject to lax enforcement. And when chokeholds specifically were banned, a variation on the neck restraint was often permitted instead.

Be sure to stay tuned to the Coffman Law blog, as we will continue updating our readers on the latest and most important legal news and the remedies available to seek justice for violations of constitutional rights.

If any readers or their loved ones have been wrongfully treated by police officers and want to assess their legal options, do not hesitate to reach out to Coffman Law. By leveraging his successful track record of helping victims and their families seek justice for over 15+ years and combining that experience with his overall knowledge of the court system in Illinois and Indiana, Owner and Founding Partner Brian Coffman launched his own Civil Rights Practice Group to help free those who have improperly treated by law enforcement. Click HERE to contact our office for a free consultation.